Tamaki Kawazoe ( 川添 珠姫 | Kawazoe Tamaki ) is one of the main protagonists of Bamboo Blade. She is a proud member of the Muroe High School Kendo Team. She also practices Kendo at home as well. She comes off as a pretty kind person and is known by friends as Tama-Chan. She lives with her seen but unnamed father and Tsubaki Kawazoe (Tamaki's mother) died when Tamaki was young. She goes to Muroe High School and practices Kendo at home. Even though she is young she is one of the best Kendo fighters at school. She is known as Tama-chan by her friends.

Tamaki is a first year high school student who is nicknamed "Tama-chan" for short. Despite being a kendo prodigy, she does not see it as a hobby, but rather just as a chore honed at her home, which happens to be a Kendo dojo led by her father. She refuses to join the school's Kendo Club because she thinks it is unnecessary, but temporarily becomes a member in order to fight off a bully. She despises injustice due to her overdeveloped sense of righteousness and fair play inspired from watching tokusatsu (Her favorite being Blade Braver, a show within a show) as a child. She remains a big anime and tokusatsu fan despite her age. Her dedication to anime is such that she once spoke to her father (whom she greatly respect) in an aggressive manner, telling him not to touch her T.V. recorder because it is recording her anime. At first she was very shy and unsociable, but after holding a part-time job at Miyako Miyazaki's acquaintance's store she begins to overcome her shyness and open up to her teammates more often. Kirino Chiba and Sayako Kuwahara (and for that matter, most girls in the story) find her very cute, often putting Tamaki's hair up in ponytails or making her fight in Kendo matches just because they want to see her fight. She knows Yūji Nakata before the series began, and has been called "Tama-chan" by him since their childhood (although she does not like the nickname very much, since it makes her seem childish). She is described as being the strength of the group by Kojirō. Tamaki lost for the very first time in the Kanto High School Kendo Tournament to Rin Suzuki, Tamaki's arch-rival stemming from the Blade Braver series. Her loss was partly because Rin used the high stance which reminded her of her late mother causing her to lose focus and concentration temporarily.

Tamaki is a very fast and aggressive kendo practitioner. She relies more on her speed than her power, however she will do anything to prove that her hit is strong (striking an opponent with one hand to get a point). She usually targets the opponents head, (men) but can also be repeatedly targeting torso (dou) and wrists (kote). Before striking, she normally evaluates the opponent. Being a prodigy, she can tell how strong or weak the opponent is just by looking at their stance. She is constantly seen to be too fast for her opponent to react. However, her strongest move is the thrust to the throat (tsuki). Performing tsuki is more commonly done by men, that's why everyone was shocked when she used it against Konishi of Toujou High. The tsuki was so strong that it made Konishi freeze with shock and pain. She also has a strong spiritual scream (kiai). It is so loud that everyone in the arena was shocked (during the match with Konishi).

Her skills have been shown to inspire those who are less skilled than her, such as Mei Ogama, who'd decided to quit her school's kendo club after a practice spar between Muroe High and Seimei High because of how harsh her club's coach, Tadaaki Hayashi, was on everyone, but she was inspired to keep at it after sparring with her.

The cover of bamboo blade manga #1 which features Tamaki

The cover of bamboo blade manga #14 which also features tamaki 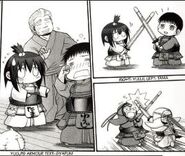 Tamaki and her mom walking. Her mom taught Tamaki kendo at a young age before she died
Community content is available under CC-BY-SA unless otherwise noted.
Advertisement